It’s a funny thing about monocultures. They’re highly vulnerable to anything that affects that particular variety. Dr. Mae-Wan Ho writes:

The scene is set at harvest time in Arkansas October 2009. Grim-faced farmers and scientists speak from fields infested with giant pigweed plants that can withstand as much glyphosate herbicide as you can afford to douse on them. One farmer spent US$0.5 million in three months trying to clear the monster weeds in vain; they stop combine harvesters and break hand tools. Already, an estimated one million acres of soybean and cotton crops in Arkansas have become infested.

The palmer amaranth or palmer pigweed is the most dreaded weed. It can grow 7-8 feet tall, withstand withering heat and prolonged droughts, produce thousands of seeds and has a root system that drains nutrients away from crops. If left unchecked, it would take over a field in a year.

Meanwhile in North Carolina Perquimans County, farmer and extension worker Paul Smith has just found the offending weed in his field [3], and he too, will have to hire a migrant crew to remove the weed by hand. 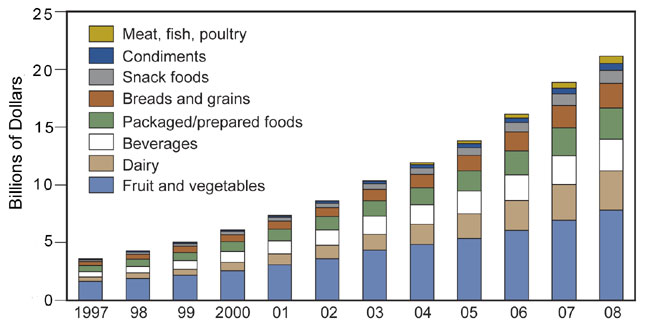 Despite the recent economic downturn, organic farming continues to boom:

The article asks why more farmers don’t switch to organic, then. Well, they owe the bank bigtime for their spraying equipment, and they don’t own any cultivators or turnplows because they’ve been sold on no-till by agricultural colleges funded by chemical companies. On the other hand, they’re going to go broke the way they’re going:

Meanwhile, the mutant pigweed has been seen in cotton fields in Lowndes County (I heard about it from neighbors before I read about it anywhere). And there’s another problem with cotton:

At the same time, secondary pests such as the tarnished plant bug, against which Bt toxin is powerless, became the single most damaging insect for US cotton.

Severe economic consequences ensued, because cotton was the main crop, and only one strain of cotton was grown. Farmers faced bankruptcy. Towns failed. Monoculture cotton was bad anyway, because cotton exhausted the soil. Together with bad weather, it resulted in the Dust Bowl. Depression.

Do we want all that on top of the current Great Recession?

We don’t have to. Better ways of farming are well known. But wait! What’s Monsanto’s solution:

Monsanto’s technical development manager Rick Cole was reported saying that the problems were “manageable”. He advised farmers to alternate crops and use different makes of herbicides. Monsanto sales representatives are encouraging farmers to mix glyphosate and older herbicides such as 2,4-D, banned in Sweden, Denmark and Norway on account of links to cancer and reproductive and neurological damages. It is a component of Agent Orange used in Vietnam in the 1960s.

Ah, instead of glysophate, which causes birth defects and other problems, let’s go back to dioxins!

Farmers in Georgia are reported to be going back to conventional non-GM crops.

Local agriculture of diverse crops can immunize our economy against this problem. Conventional farmers can convert, and end up better off:

Most relevant for US farmers is a study by Kathleen Delate of Iowa State University and Cynthia A. Cambardella of the US Department of Agriculture assessing the performance of farms during the three-year transition it takes to switch from conventional to certified organic production [26]. The experiment lasting four years (three years transition and first year organic) showed that although yields dropped initially, they equalized in the third year, and by the fourth year, the organic yields were ahead of the conventional for both soybean and corn.

If governments want to help, more companies than banks are too big. And if we’re going to reform banks, maybe get them to stop loaning for monoculture spraying equipment and start loaning for organic farmers. How about rewarding farmers who already farm organically and trade locally, for leading the way to sustainable nontoxic agriculture.