Here’s why we should have burned this patch last year, but unfortunately weather didn’t cooperate.

Why frequent burning is necessary

If we didn’t burn, eventually what we’d get would be an uncontrolled wildfire with much worse flareups than that.

Somebody always complains about burning woods. Let the Longleaf Alliance explain the benefits of fire in a southern pine forest.

It started easy this year. END_OF_DOCUMENT_TOKEN_TO_BE_REPLACED 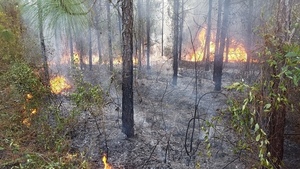 Less than an acre of planted pines, never burned since planted ten years ago. Lit right up, burned real nice.

Here are some videos, and there are pictures below. END_OF_DOCUMENT_TOKEN_TO_BE_REPLACED

END_OF_DOCUMENT_TOKEN_TO_BE_REPLACED

In Salon, Chris Kahn writes that Winners and losers emerge in climate bill:

Owners of large tracts of forest land also will get a lot of interest from the business community. Like farmers, environmental experts see them as a huge player in the carbon economy because of their natural ability to absorb carbon.

Louis Blumberg, director of climate change for the Nature Conservancy’s California chapter, envisions a system in which forest owners could make money simply by signing an agreement to cut down fewer trees for lumber.

The Nature Conservancy did just that last year with the Conservation Fund, a nonprofit agency that owns about 24,000 acres of redwood and douglas fir forest northwest of San Francisco. The groups changed the logging schedule on the property, and the fund expects to receive about $2 million from Pacific Gas and Electric, which participates in a regional climate initiative similar to the one that the Waxman-Markey bill would create around the country.

“This is really a model of what can happen,” Blumberg said. “Property owners everywhere want to figure out a way to be part of this.”

The picture is of Garcia River Forest, “recognized by the California Climate Action Registry as a certified source of carbon credits.”

South Georgia has a lot of forest land. Some of it is even natural. Maybe Georgia Power or Colquitt Electric would like to trade some carbon credits for letting trees grow longer. Of course, it doesn’t have to be a power comapany based in Georgia. Maybe PG&E would like to trade….