BSA/The Software Alliance, which represents companies like Apple and Microsoft, said in a brief that a decision against Monsanto might “facilitate software piracy on a broad scale” because software can be easily replicated. But it also said that a decision that goes too far the other way could make nuisance software patent infringement lawsuits too easy to file.

And SCOTUS could say this decision applies only to seeds. Although software patents could use some massive reforming too. I say that, and I have several software patents.

The story finally gets to the point:

Some critics of biotechnology say that a victory for Mr. Bowman could weaken what they see as a stranglehold that Monsanto and some other big biotech companies have over farmers, which they say has led to rising seed prices and the lack of high-yielding varieties that are not genetically engineered.

Patents have “given seed companies enormous power, and it’s come at the detriment of farmers,” said Bill Freese, science policy analyst for the Center for Food Safety, which was an author of a brief on the side of Mr. Bowman. “Seed-saving would act as a much needed restraint on skyrocketing biotech seed prices.”

Farmers who plant seeds with Monsanto’s technology must sign an agreement not to save the seeds, which means they must buy new seeds every year.

Monsanto has a reputation for vigorously protecting its intellectual property.

It’s curious how the supposedly objective New York Times not-so-subtly takes the side of Monsanto (yet another example of how there really is no such thing as reportorial objectivity, and pretending there is is harmful). Let’s look farther afield. the Japan Times carried a story from the Washington Post 11 February 2013, U.S. top court to weigh biotech patent limits: Firm sues over ‘copies’ grown from seeds of proprietary plants,

Farmer Hugh Bowman hardly looks the part of a revolutionary who stands in the way of promising new biotech discoveries and threatens Monsanto’s pursuit of new products it says will “feed the world.”

“Hell’s fire,” said the 75-year-old self-described “eccentric old bachelor,” who farms 300 acres (120 hectares) of land passed down from his father. Bowman sat in a recliner with his boots off, wearing reading glasses that still had the tag that once held them to a drugstore rack, and a Monsanto promotional cap on his balding head. “I am less than a drop in the bucket.”

See the difference between that and what the NY Times wrote about his land?

With his mere 300 acres of soybeans, corn and wheat, Vernon Hugh Bowman said, “I’m not even big enough to be called a farmer.”

And that’s a very large part of the problem with Monsanto. Their worship of the Great God Efficiency that says anybody who doesn’t farm thousands of acres of the same exact commodity crops Monsanto has patented isn’t a farmer.

Back to the Japan Times/Wapo article:

“Inventors are unlikely to make such investments if they cannot prevent purchasers of living organisms containing their invention from using them to produce unlimited copies,” Monsanto stated.

Bowman said the company’s claim that its patent protection would be eviscerated — should he win — is “ridiculous.”

“Monsanto should not be able, just because they’ve got millions and millions of dollars to spend on legal fees, to try to terrify farmers into making them obey their agreements by massive force and threats,” he said.

Ain’t that the truth!

Even the NY Times concludes:

Mr. Bowman said that before his case, Vernon Hugh Bowman v. Monsanto, 11-796, was taken pro bono by Mark P. Walters and other lawyers from the firm of Frommer Lawrence & Haug, he had spent $31,000 on legal fees and handled much of the legal research himself, using a computer at the library because he does not own one. He said he never considered settling because he thought he was in the right.

“I was prepared to let them run over me,” Mr. Bowman said, “but I wasn’t getting out of the road.”

There’s a wise attorney! Win or lose, Mark P. Walters will have a SCOTUS case on his resume, and he’s fighting for a worthy cause.

And there’s a brave farmer! Sure, he can afford to do this in a way most farmers can’t: he has no family to support or whom somebody might threaten. And he for sure isn’t a revolutionary: he still wants to use those poison-making Monsanto seeds (the bT gene in them makes the soybean plant itself create a pesticide), presumably growing them using more poison pesticides. But he’s still willing to stand up against one of the most powerful companies in the world. 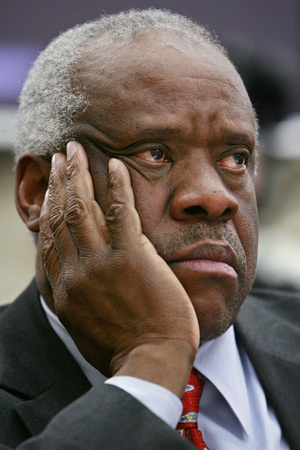 What will former Monsanto attorney and now Supreme Court Justice Clarence Thomas say? Monsanto says about a previous case, Pioneer Hi-Bred International v. J.E.M Ag Supply, decided 10 December 2001, that Justice Thomas indeed wrote the majority opinion. Monsanto makes excuses that Thomas hadn’t been employed with Monsanto since the 1970s and it was a 6 to 2 decision. Hm, there are nine SCOTUS Justices, not 8. Politicol News wrote 21 May 2011 about yet another case, Monsanto- v. Geertson Seed Farms, Clarence Thomas-Monsanto Lawyer-Conflict of Interest,

Another judge Charles Breyer who ruled in the original 2007 case is the brother of Stephen Breyer and has recused himself in the case.

I say Thomas also should have recused himself from that case and he should recuse himself from this Hugh Bowman case. And the rest of the judges should rule against Monsanto. What do you say?