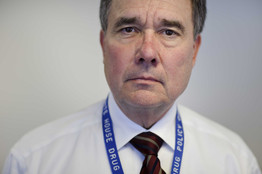 The Obama administration’s new drug czar says he wants to banish the idea that the U.S. is fighting “a war on drugs,” a move that would underscore a shift favoring treatment over incarceration in trying to reduce illicit drug use.

In his first interview since being confirmed to head the White House Office of National Drug Control Policy, Gil Kerlikowske said Wednesday the bellicose analogy was a barrier to dealing with the nation’s drug issues.

“Regardless of how you try to explain to people it’s a ‘war on drugs’ or a ‘war on a product,’ people see a war as a war on them,” he said. “We’re not at war with people in this country.”

That’s a refreshing change, given that the 5% of the population that’s incarcerated and their families and friends might well wonder if the government is at war with its own people. There are indeed some nasty sociopaths out there who need to be locked up to protect everyone else. But there aren’t enough of those to account for the U.S. prison population. The “war on drugs” accounts for many of the rest.

It’s interesting that this article was published in the WSJ, not generally known as a left-wing rag. Kerlikowske, for that matter, is a former police chief. As is customary with newspaper articles, it ends with a counter view:

James Pasco, executive director of the Fraternal Order of Police, the nation’s largest law-enforcement labor organization, said that while he holds Mr. Kerlikowske in high regard, police officers are wary.

“While I don’t necessarily disagree with Gil’s focus on treatment and demand reduction, I don’t want to see it at the expense of law enforcement. People need to understand that when they violate the law there are consequences.”

Indeed, even people at the highest levels of government need to learn that for themselves. But the solution to Pasco’s conundrum for the “war on drugs” is to change the laws. That alone won’t do it, however. Just throwing convicts back on the street after being in prison with real criminals wouldn’t be nearly as good as implementing programs to reintegrate them into the community and to prevent others from getting drug habits in the first place. Kerlikowske’s approach is needed at the same time, and even before, changing the laws.

For those who say it can’t work, try this article about Norway, which actually provides public assistance for drug addicts instead of locking them up, yet does not have any large population of addicts, and is actually growing its economy during the current economic depression.