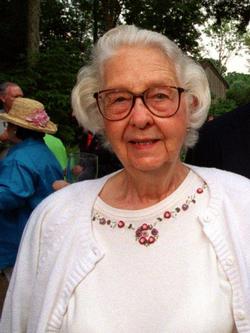 A Memorial service will be held at 10 a.m., Saturday, June 21, 2014 at Westminster Presbyterian Church, 3900 West End Avenue, with a reception at the church following the service. Guestbook crawfordservices.com.

At the funeral center, there is a longer obituary which adds to this previous post the additional information below:

Today Aunt Elsie stepped over the final fence, dying peacefully at her home in Nashville, Tennessee, attended by her nephew Patrick and his wife Ann, as she had wanted.

A Memorial Service will be held at 10am, Saturday, June 21, 2014 at Westminster Presbyterian Church, 3900 West End Avenue, Nashville, TN with a reception at the church following the service. Elsie said many times that she greatly appreciated the way many different groups mingled to work to preserve, protect, and enjoy plants and the environment they are part of. The family hopes that the service and reception will continue that mingling which she so enjoyed.

In lieu of flowers, the family requests to donate, in her memory, to groups and organizations such as:

or any other group dedicated to enjoying and preserving plants and their environment.

See the Elsie blog page for many more stories and pictures of Aunt Elsie.