Today Aunt Elsie stepped over the final fence, dying peacefully at her home in Nashville, Tennessee, attended by her nephew Patrick and his wife Ann, as she had wanted.

Arrangements are still in progress. Perhaps more about the family later. For now, here is a biography with some pictures.

…her passion for the plant life of Middle Tennessee’s cedar glades blooms ever strong through the generations of students she inspired at Vanderbilt University from the 1940s into the mid-1970s. And those students, many now teachers themselves, continue to inspire new students and conservationists…. 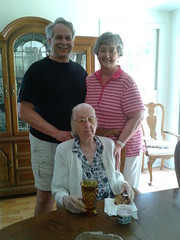 Patrick Quarterman, Elsie’s nephew… and wife Ann live with the renowned plant ecologist and Vanderbilt University professor emerita in Nashville and are her caregivers.

“Elsie Quarterman was a frontrunner in getting the knowledge about the cedar glades started. She was instrumental in getting some of the areas in the Cedar Forest designated on the National Register and was one of the few leaders that brought attention to the glades and their uniqueness,” said Cedars of Lebanon State Park Interpretive Specialist Buddy Ingram.

As for the wildflower weekend, Ingram said, “It’s time for people to come out and enjoy the flowers and endemics, the special animals and plants that have adapted to the glade environment, and time to gain knowledge about the whole ecosystem, the cedar glade.” 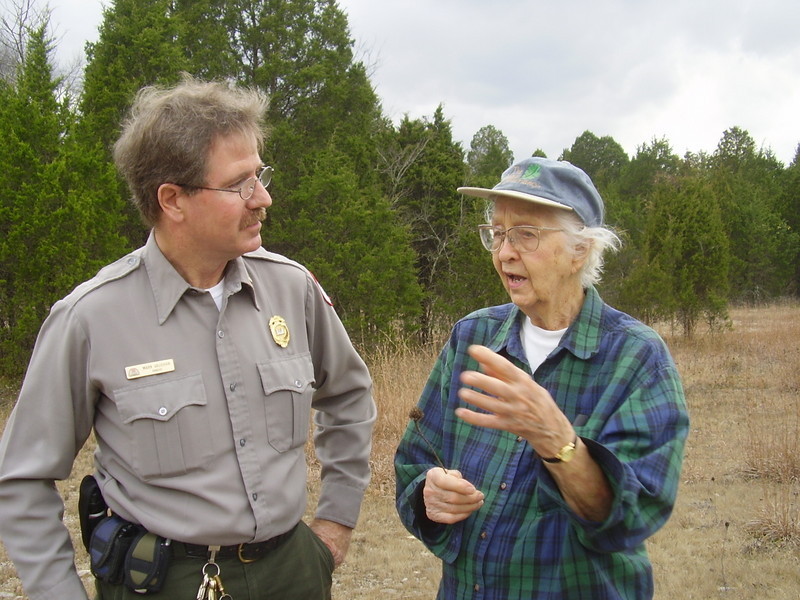 Besides the Cedar Glade Wildflower Festival, the Elsie Quarterman Cedar Glade, a 185-acre natural area in Rutherford County that protects a globally rare cedar glade and is a recovery site for the federally endangered Tennessee coneflower (Echinacea tennesseensis), has also been named for the centenarian whose love for plants began as a child on a Georgia farm.

“It goes back to when her dad left his job in waterworks in Valdosta and decided to buy a farm and moved the family there,” Patrick said. “Her mother and a family friend (Edna Winn Small) used to take Elsie with them when they went walking out in the woods. They were interested in finding and identifying flowers and plants.”

When she went to college, Elsie joined the local botanical club and found herself the only teenager in the group. Her passion for plants continued to grow.

After teaching English for five years, she decided to take a plant ecology summer field class in 1938 at Duke University with Professor

Henry J. Oosting. The experience hooked her on ecology. Several years later, she and a graduate school friend, Catherine Keever, spent a summer assembling a checklist of plants that grew in the highlands area of the North Carolina mountains. The Highland Biological Station was near the summer home of E.E. Remke, the head of the biology department at Vanderbilt University.

Remke, upon meeting Elsie, learning of her credentials and impressed by her work, offered her a job at Vanderbilt as a biology lab instructor. Once the men began to return from World War II, Elsie knew she would need a Ph.D. to hold on to her job, thus began studying at Duke where Professor Oosting advised her to peek into an ecosystem known as cedar glades, which were easily accessible from Nashville.

Thus, in 1946, Elsie honed in on 300 square miles where Lebanon limestone lay on the surface and where cedar glades developed. Three years later, she completed her doctorate, and her dissertation was published in 1950. Later she collaborated extensively with Keever, and the duo co-wrote a seminal 1962 paper about Southern coastal plain hardwood and pine forests [Elsie Quarterman and Catherine Keever 1962. Southern Mixed Hardwood Forest: Climax in the Southeastern Coastal Plain, U.S.A. Ecological Monographs 167. http://dx.doi.org/10.2307/1942384], but today Quarterman remains known best for her work on the ecology of Tennessee cedar glades. In 1964 she became the first woman Department Chair at Vanderbilt when she chaired the biology department in 1964. 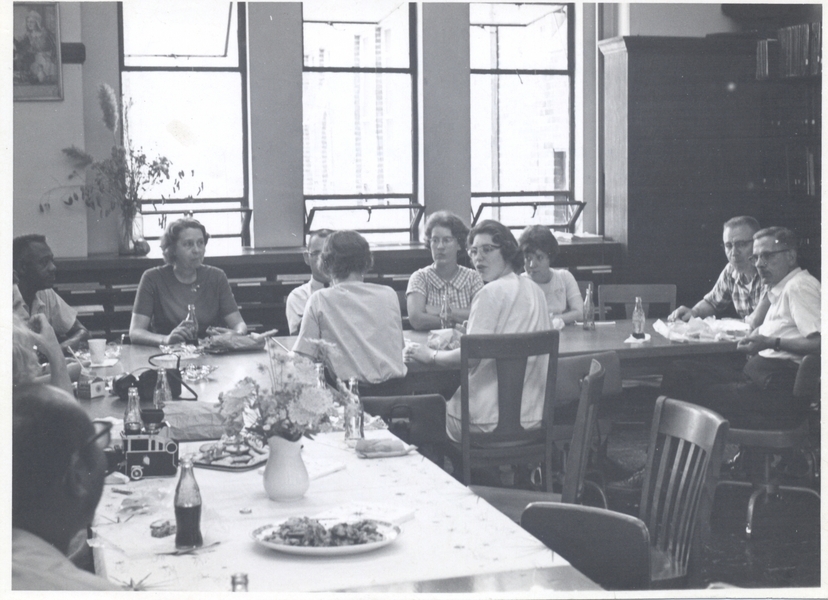 Through the decades the teacher guided students and conservation workers through the cedar glades, but she also worked as a conservationist to preserve other areas as well.

“I know of no one who has given more generously or with greater dedication to save our natural heritage than Elsie Quarterman,” said Mack Prichard, who worked beside her to help preserve Radnor Lake in Nashville and Savage Gulf State Natural Area. (Prichard also served Tennessee for nearly 50 years as State Naturalist and State Archeologist.) 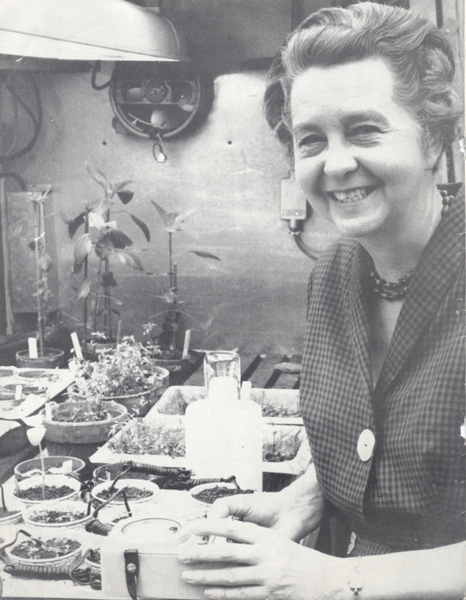 “I think she enjoyed equally teaching in the classroom and making excursions into the field,” her nephew Patrick said. “She tied the pictures she took in the field with her lectures, and made it exciting.” One of Elsie’s most exhilarating moments must have come in 1968 as she and Barbara Turner were driving down a road near LaVergne and noticed a surprising a patch of color on the roadside:

“We thought it was a mighty pretty pink flower. I thought it probably was [Tennessee coneflower] but I’m not a taxonomist,” Elsie said. “Dr. McGregor [an expert on the genus from Kansas] came down as soon as his term was over. He took samples back and studied them for a while, tried some crosses with purple coneflowers and others, then wrote back that it was a species.”

The species was indeed the Tennessee coneflower, the same plant McGregor had officially decreed extinct a few years earlier.

In 1970, Elsie and doctoral student Tom Hemmerly found a larger group of coneflowers at Cedars of Lebanon State Park. Hemmerly’s dissertation became the basis for restoration efforts as the Tennessee coneflower became the first flowering plant native to Tennessee named to the federal endangered species list.

Patrick Quarterman says that his aunt’s general health is excellent, however she suffers from macular degeneration and some memory loss. Still, life is good for the professor who retired in 1976. 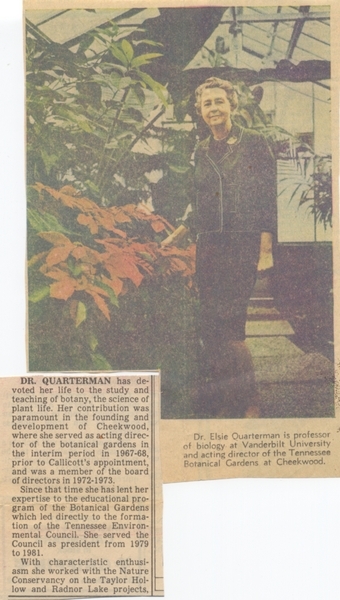 Ann Quarterman said, “She loves living in her own home with family where she can walk around in her own yard to see all the different wildflowers and plants growing there. She enjoys going out on short rides in the car to look for anything blooming and especially when we take her through the parks. Our trips to Cheekwood really make her smile.”

As for Elsie Quarterman’s most enduring legacy, Patrick said that would be, “First of all, the work she did in the cedar glades—to get them recognized and appreciated—and second, her 12 Ph.D. students, most of whom ended up going into teaching themselves. She has influenced two generations of students, particularly Tom Hemmerly at Middle Tennessee State University, who has done extensive work on the coneflower. He has students who are now doing cedar glade research of their own. Her protÃgÃs also include Carol and Jerry Baskin of the University of Kentucky, who also had many Ph.D. students, some of whom are presently doing research in the cedar glades.”

Portions of this article were used with permission from “Middle Tennessee is Still in Bloom: Dr. Elsie Quarterman” by Bob Fulcher in “The Tennessee Conservationist Quarterman shares fervor for cedar glades.”

Here is Elsie, at the age of 95, leading relatives on a field trip on the Isle of Skye: 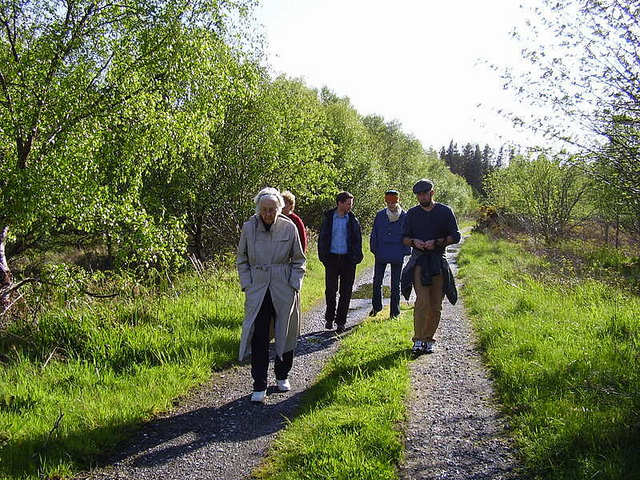