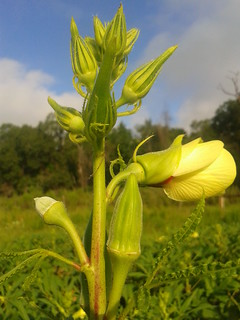 Don’t get your hopes up about that 72% figure: that seems to be that when cancer cell death occurred, 72% of it was related, not that 72% of cancer cells were killed. The 63% cancer cell growth inhibition does seem promising, though.

There are even hints in another paper that okra may be related to lower rates of prostate cancer:

…a “Southern” pattern, which was characterized by higher intakes of foods such as okra, cornbread, or sweet potatoes. The “Southern pattern” had a suggestive inverse association with prostate cancer risk (highest versus lowest tertile: RR, 0.6; 95% CI, 0.4-1.1; Ptrend = 0.08). The authors speculated that the observed association was due to living in the South, which may be related to lower risk of prostate cancer due to higher sunlight (vitamin D) exposure. In that study, statistical power was limited (136 cases). In a small case-control study from Canada (80 cases) a “processed diet” was significantly associated with an increased risk of prostate cancer (4).

So this survey paper couldn’t really find any research that directly associated okra eating with lowered prostate cancer risk, but it did find one study that showed a diet including okra had some slight decreased risk, and another study that showed a significant increased risk for a diet of processed foods. So okra is better than processed foods for prostate cancer, and it tastes better, too. That was Dietary Patterns and Risk of Prostate Cancer in U.S. Men, by Kana Wu1, Frank B. Hu1, Walter C. Willett1 and Edward Giovannucci1, doi: 10.1158/1055-9965.EPI-05-0100, Cancer Epidemiol Biomarkers Prev January 2006 15; 167.

The association with okra helping against breast cancer is much clearer.