The script Tyson read (but did not write) said:

This was one of the first times that the authority of science was used to cloak a threat to public health and the environment. Robert Kehoe, a young doctor from Cincinnati, was hired by GM. He raised scientific doubts in the public mind about the dangers of lead. Lead was naturally occurring in the environment, he said. Yes, there might be occupational hazards for the people who worked with lead, but that could be best handled by industry self-regulation. And there was no evidence to suggest that lead posed any threat to the consumer. For decades no one challenged him Until Clair Patterson went searching for the age of the earth.

In the Secret History of Lead, Jamie Lincoln Kitman remarks:

“The leaded gas adventurers have profitably polluted the world on a grand scale and, in the process, have provided a model for the asbestos, tobacco, pesticide and nuclear power industries, and other twentieth-century corporate bad actors, for evading clear evidence that their products are harmful by hiding behind the mantle of scientific uncertainty.” 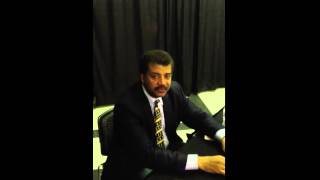 In case you missed it, in this youtube video, Tyson was asked what he thought about transgenetic foods, or GMOs. He didn’t actually answer the question, digressing about selective breeding, which isn’t the same as inserting a toxic gene from a bacterium into foods so they produce a pesticide.

This goes beyond the basic problem many people have of focussing on GMOs alone, while ignoring that their most massive use is in seed monopolies by Monsanto, Dupont, and a handful of other companies.

Those seeds are grown with massive pesticide spraying that pollutes the ground, poisons our water, and breeds mutant weeds that more spraying doesn’t solve. Some of those pesticides remained in all urine samples tested by a German study and in the urine of school children according to a Canadian study using USDA data, from Kansas to Manhattan, where Tyson works.

Unlike many commentators (example), I don’t think Tyson is lying. I think he is simply out of his element as an astrophysicist and doesn’t know the context.

Tyson stands on a mighty bully pulpit. He needs to get his science straight. And he needs to understand what French farmer Paul François said about his lawsuit for nerve damage due to inhaling Lasso:

“Farmers need to understand that those who speak for them are businessmen who defend other interests, very lucrative for the businessmen, who do not care about farmers’ health or the health of those around us.”

Tyson should understand that, after he narrated Episode 7 of Cosmos, which concluded:

“Today, scientists sound the alarm on other environmental dangers. Vested interests still hire their own scientists to confuse the issue. But in the end, nature will not be fooled.”

We need Tyson to counter Monsanto’s misuse of the authority of science “to cloak a threat to public health and the environment”. Science up, Tyson!