Update 2019-02-10: His previous land on Coffee Road at Jackson Road, and family pictures.

Much to my surprise, according to evidence turned up by the Wiregrass Region Digital History Project (WRDHP), an owner of the mill at Bowen Mill Pond west of Quitman, Georgia was my great-great-grandfather, Benjamin Waters Sinclair. 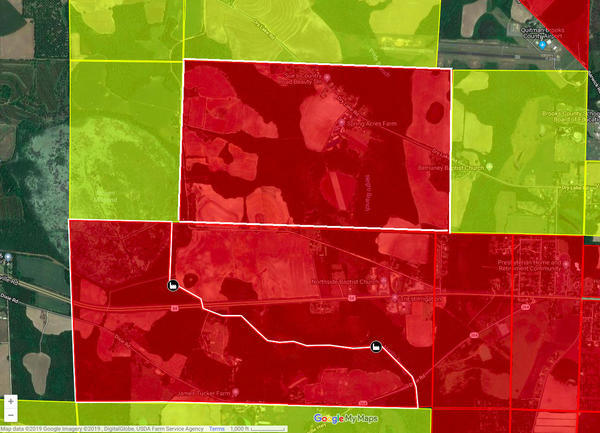 We have created a series of maps overlaid upon a modern google earth map that depict the property lines of the area about 1870. These have been compiled from tax lists, deed books, sheriff sales, and other records. All of that information is searchable.

Red = The landowners or their families that were there before the Civil War were still there.

Blue = The landowners came during the Civil War.

Brown = Freedman landowners, or in some cases land that was owned by free people of color before the Civil War.

Light Blue = Land the was owned by people outside of the county.

Yellow = Land that the landowners from about 1870 cannot be positively identified.

Areas without color are those land records have not been encountered yet, and were probably owned by people living elsewhere in Georgia.

For the mill marked with the icon just southeast of Bowen Mill Pond, WRDHP says:

For the odd-shaped property straddling the Thomasville Road (US 84) south of Bowen Mill Pond, WRDHP says:

Property of George Hicks to be sold May 1845. Including mill.

For the rectangle east of Bowen Mill Pond (the other plot outlined in white), WRDHP says:

So apparently B.W. Sinclair owned somewhere around 900 to 1000 acres.

This is a far cry from what I thought he owned, which I imagined as a hardscrabble small farm off of what is now GA 76, between Quitman and Morven.