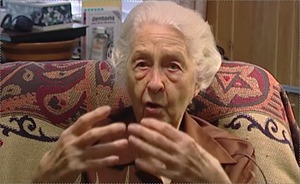 Here’s a video about Elsie, A Crusader for Conservation, 19 September 2014, by Tennessee’s Wild Side, “The Emmy Award winning show produced through the generosity of the Jackson Foundation, Tennessee State Parks, and the Tennessee Wildlife Federation.” Lots of good pictures, some video snippets of Elsie, and some narration by her nephew Patrick and by Biologist Tom Hemmerly, who reminds us of Elsie’s work at Radner Lake, in addition to her cedar glades work. Ranger Buddy Ingram explains her biggest contribution may have been in getting numerous different segments of society to cooperate in saving whole ecologies. Botanist Kim Sadler and others explain how inspiring all that is to generations of students. 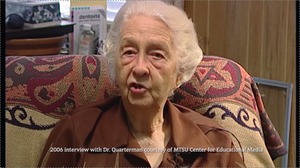 The general public needs to know what’s around them. They need to be learning that there’s a world that is not paved. There are lots of things that have life and function in the whole scheme, people as well as plants and animals. Not just dogs you’ve got on a leash, but animals that live out there, are part of the whole ecosystem.

END_OF_DOCUMENT_TOKEN_TO_BE_REPLACED A different process goes on when an island forms by splintering. Here, the ecosystem is pre-existing: the island is created with a set of residents already in place. But it is now too small to support them all.

What happens next is a kind of unraveling, a fraying, a disassembling such that the ecosystem becomes simpler, so as to fit the space that is now available. On those recently-created islands of Indonesia, for example, the smallest islands are home to many fewer species than the largest islands. And, as you’d expect, you don’t find big animals on the smallest islands either.

When we humans burn tracts of forest, or make islands in some similar way, the immediate impacts depend on a suite of factors, including how many islands there are, how big they are, and how close they are together. It also matters what is between them. Fields may be more hospitable to wildlife than roads or water; under some circumstances, life forms may be able to flit from one fragment to another, and the “island” nature of the fragments will be reduced. Perhaps we can use such patterns to shape how we use land, to try and minimize the impact we have.

She’s not talking about prescribed forest burns, which are actually necessary for longleaf pine forest ecology. She’s talking about burns that destroy forests.

The once-mighty longleaf pine ecology that spread from eastern Virginia to east Texas now only exists in tiny islands separated by cities, fields, and roads. Maybe we should preserve the few patches that are left. This isn’t just about plants and animals, you know, it’s also about flood control, food supply, and living conditions.

Half a century ago we overused pesticides, in particular DDT, which caused birds’ eggs to become too fragile. Bald eagles vanished from many places. But sometimes they come back, when we stop poisoning them and instead save some habitat.

The eagle pictured was just sitting beside the road as we drove by. There are more in nearby counties. Picture by Gretchen Quarterman, 23 March 2010.

Janisse Ray plans to speak in Moultrie and sign books.

The Georgia Center for the Book, with the support of the Georgia Humanities Council, is working with the Moultrie-Colquitt County Library System and the Moultrie Chapter of the Georgia Conservancy to present a free public lecture and book-signing by Ray on Tuesday, Jan. 26, at 7 p.m., in the library auditorium.

Ray was born in Baxley, Ga., and is an environmentalist activist, poet, a memoirist and the award-winning author of “Ecology of a Cracker Childhood.” This book, a memoir about growing up on a junkyard in the ruined longleaf pine ecosystem of the Southeast, was published by Milkweed Editions in 1999.

Ray has won a Southeastern Booksellers Award 1999, an American Book Award 2000, the Southern Environmental Law Center 2000 Award for Outstanding Writing, and a Southern Book Critics Circle Award 2000. “Ecology of a Cracker Childhood” was a New York Times Notable Book and was chosen as the Book All Georgians Should Read.

As an organizer and activist, she works to create sustainable communities, local food systems, a stable global climate, intact ecosystems, clean rivers, life-enhancing economies, and participatory democracy. She is a founding board member of Altamaha Riverkeeper and is on the board of the Environmental Leadership Center of Warren Wilson College and Satilla Riverkeeper.

Are you tired of development trumps all? Do you like trees and home-grown vegetables? Come hear Janisse Ray!

The problem, Jackson explains, is that agriculture in most places is based on practices that use up limited resources. The major grains, like wheat and corn, are planted afresh each year. When the fields are later plowed, they lose soil. The soil that remains in these fields loses nitrogen and carbon.

This worries Jackson because vast quantities of soil are washed out of the fields and down the rivers, and the soil that’s left is gradually losing its nutrients.

Trying to figure out how to solve this problem, Jackson realized the answer was right in front of him. It was the patch of native prairie on his own farm — full of grasses from ankle to shoulder height, peppered with white and purple flowers, and surrounded by shrubs and cottonwood trees.

“Here is a steep, sloping bank with a lot of species diversity, featuring perennials,” Jackson says. “This is what I call nature’s wisdom.”

Perennials are plants that put down strong roots 10 feet or more into the ground and hold the soil in place. Perennials live year-round, unlike annual crops that get planted every year. In Kansas, perennials survive the harsh winters and the blazing hot summers.

The solution will have to be somewhat different for each region, END_OF_DOCUMENT_TOKEN_TO_BE_REPLACED