If my experience last month in Turkey is any indication, the notion that GMOs are the only way to feed a growing population is way out of step with both the leading thinkers on food and farming and the world’s smallholder farmers ”who produce much of what the planet eats and 80 percent of the food in Asia and sub-Saharan Africa.

These farmers may not have money on their side, but I saw the power of strength in numbers at the Organic World Congress. Held this year in Istanbul, the conference brought together people from 81 countries to discuss the latest research from organic farm fields and to share private and public developments that promote organic agriculture.

What I heard should have biotech execs shaking in their boots, or their penny loafers, as the case may be: Organic agriculture is taking off around the world, especially where it’s needed most. About 80 percent of all organic producers are based in developing countries, with India, Uganda, Mexico, and Tanzania leading the charge. To date, 162 nations are now home to certified organic farms, and in 2012 the 37.5 million hectares of farmland produced a harvest worth $63.8 billion. While that works out to less than 1 percent of global agricultural land, the figure dramatically undercounts the actual amount of land farmed using organic principles, as many farmers are not part of an official certification program. And consider that globally, organic agriculture has received a fraction of the subsidies and 0.4 percent of the research dollars funneled into chemical farming ventures.

One of the themes of the three-day gathering in October was that embracing these practices is increasingly being seen as key to food security….

She cites specifically a 30-year Rodale study (previously blogged here) and a study from Slovakia, Comparison of organic and conventional farming system in term of energy efficiency, by M. Klimeková and Z. Lehocká, which she says demonstrates that chemical farming takes more than 50% more energy than organic farming. See also Crop rotation for profit.

This appears to be the conference: 18th IFOAM Organic World Congress, ICC, 13-15 October 2014, Istanbul; Anna Lappe was one of the keynote speakers. Here are the papers presented at the conference. See the main track results, emphasizing that it’s not just about enough food, but also about:

Anna Lappe also wrote for AlterNet 19 November 2014, 5 Amazing Things I Learned from the World’s Leaders of the Organic Food Movement: We can’t indefinitely blanket our farms with synthetic fertilizer or fend off pests and weeds with toxic petrochemicals, including in #2: 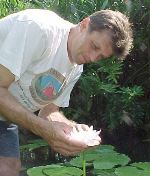 Want to see real innovation? Visit Andre Leu’s 150-acre organic farm in northern Australia where he’s growing 100 varieties of tropical fruit and dozens of other species of medicinal herbs, oils, fibers, and more. Leu, the President of IFOAM, is doing all this while successfully returning 100 acres to native, tropical rainforest and creating a refuge for endangered species like Riflebirds, buff-breasted Paradise Kingfishers and the six-foot tall, flightless Cassowary ”all while creating a successful business.

You can help disrupt the chemical oligarchy of Monsanto, Syngenta, et al. by growing food.