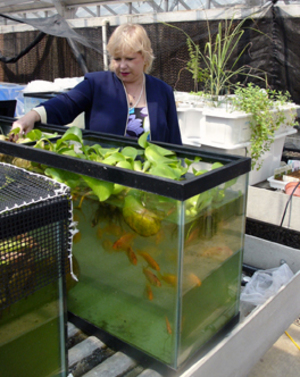 Safe local food movements are no longer a passing fad as consumers avoid the dangers and fears associated with processed industrialized food. Any number of associated causes drives concerns about GMO plants, pesticides, and other chemicals. With many options and systems designs available for cost effective ways of safe food production, one system with unique opportunities is aquaponics.

As with most food production systems, there are twists and turns on systems and designs to approach the development and management of an aquaponics system. Ranging from small do-it-yourself systems to elaborate automated commercial designs, each of these systems requires END_OF_DOCUMENT_TOKEN_TO_BE_REPLACED

How do we prove to customers that our products are free of genetically modified ingredients? while many homesteaders choose to be not certified or certified naturally grown, consumers are becoming more concerned with GMOs. We will offer practical tips for insuring consumers, as well as how to on certifications & non-GMO testing.

Members of Coastal Organic Growers (COG), Connie & Jimmy Hayes own & operate Healthy Hollow Farms near Stilson, GA, which has been certified organic since 2007. They grow organic peanuts and raise Belted Galloway cattle. They are in the process of setting up an

on-farm processing facility for their peanuts. Connie serves on the board of Georgia Organics and has trained under Jeffery Smith with The Institute for Responsible Technology to speak on GMOs.

Come to SOGALO2014 and hear Connie about getting certified organic!

END_OF_DOCUMENT_TOKEN_TO_BE_REPLACED On its corporate website, Monsanto clearly expresses its opinion that END_OF_DOCUMENT_TOKEN_TO_BE_REPLACED

Now easier to vote at the checkout counter (or the farmers market), at least for non-GMO meat.

The Agriculture Department has approved a label for meat and liquid egg products that includes a claim about the absence of genetically engineered products.

It is the first time that the department, which regulates meat and poultry processing, has approved a non-G.M.O. label claim, which attests that meat certified by the Non-GMO Project came from animals that never ate feed containing genetically engineered ingredients like corn, soy and alfalfa.

It’s not just the pesticides, it’s the crops themselves. Gilles-Eric Séralini and colleagues surveyed the state of research and found GMOs Linked to Organ Disruption in 19 Studies, as Jeffrey Smith reports for the Institute for Responsible Technology.

…consuming genetically modified (GM) corn or soybeans leads to significant organ disruptions in rats and mice, particularly in livers and kidneys. …9% of the measured parameters, including blood and urine biochemistry, organ weights, and microscopic analyses (histopathology), were significantly disrupted in the GM-fed animals. The kidneys of males fared the worst, with 43.5% of all the changes. The liver of females followed, with 30.8%. The report, published in Environmental Sciences Europe on March 1, 2011, confirms that “several convergent data appear to indicate liver and kidney problems as end points of GMO diet effects.” The authors point out that livers and kidneys “are the major reactive organs” in cases of chronic food toxicity.

And these were the corn and soybeans that people eat.

Why didn’t we know about this long ago? END_OF_DOCUMENT_TOKEN_TO_BE_REPLACED