After the prescribed burn, it’s a lot easier to see, and there are more gopher tortoise burrows than we thought. 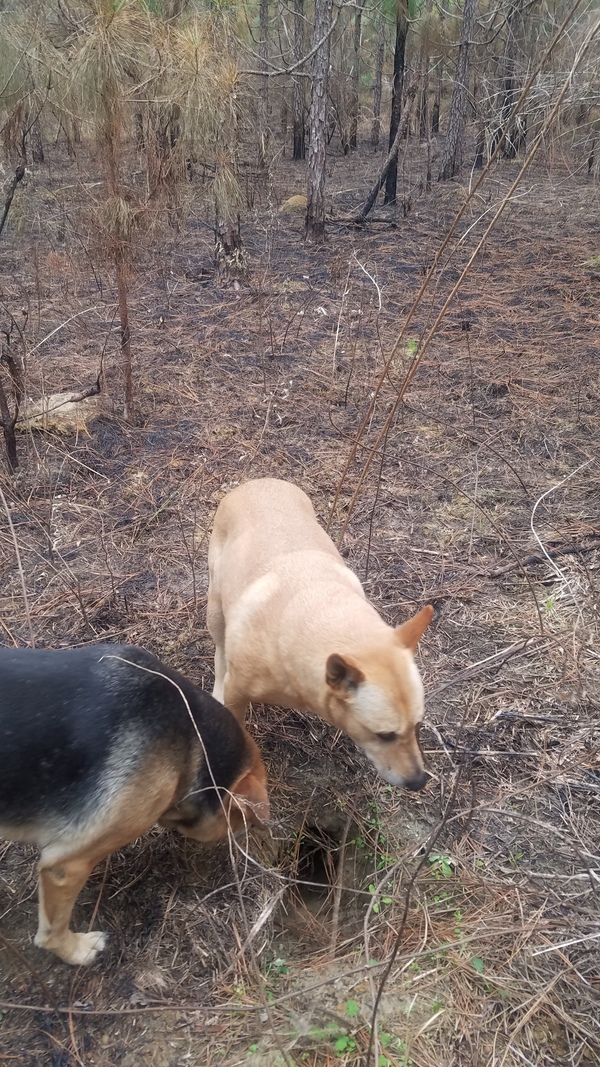 Here’s another Gopherus polyphemus near the road. It’s good there are so many. Gophers are a keystone species, hosting END_OF_DOCUMENT_TOKEN_TO_BE_REPLACED Why did the gopher tortoise cross the road?

To find a way through the fence.

The two plants that most characterize Georgia’s southern longleaf forests: Pinus palustris and Aristida stricta. These two are natives; they and their ancestors have lived on this spot since the last ice age. The gopher tortoise (Gopherus polyphemus) is named for its burrowing skills. Its shovel-shaped forefeet dig burrows up to 40 feet long that shelter and house not only tortoises, but a virtual zoo. By one count, an astonishing 362 animals take refuge in these burrows, from gopher frogs and burrowing owls to an array of snakes and invertebrates, some species depend entirely on them. If we lacked the scientific concept of a keystone species–one with an impact far beyond that expected from its numbers–we’d need to create it for the gopher tortoise, given its importance in the longleaf forest ecosystem.

With appearances by Moody Forest and people from there and from the Longleaf Alliance, not to mention gopher tortoises and indigo snakes:

Fire forest, yes! But they forgot to mention Smilax: catbriar, greenbriar, those vines that like to catch you in the woods.

Thanks to Gary Stock for the tip.

This gopher lives in the back yard. The longleaf pine cone is about 8 inches long; the gopher is about 12 inches. He’s been living in the corner of this field for a long time.

Here Carolyn visits with him: Why did the Gopherus polyphemus cross the road? So it could get back to digging. Had to chase her with the camera, but she eventually decided to dig in to get away from the dogs and me:

I noticed this gopher because the dogs kept yipping and running over to where she was. She eventually crawled off into the underbrush and went under, as you can see.

The pictures were taken with a wireless Ethernet camera, recorded by software run out of crontab every minute. The recording ends when it started to rain and I took the camera in.