Spring is in bloom or fruit. 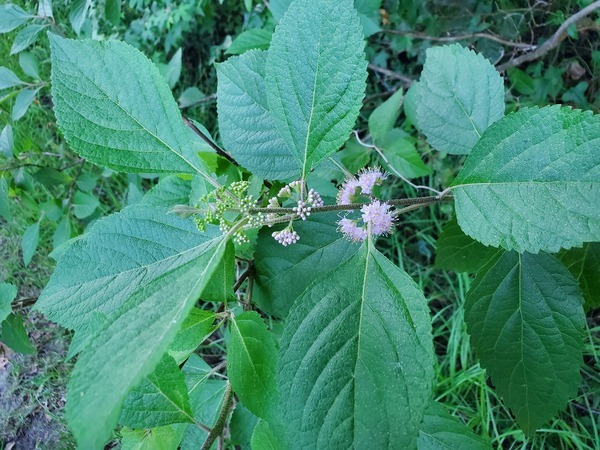 END_OF_DOCUMENT_TOKEN_TO_BE_REPLACED

On our daily walk to the field, Yellow Dog encountered the first Swamp Rosemallow of the year, and perhaps the last Treat’s Rain Lily, while the Beautyberry remains in bloom.

END_OF_DOCUMENT_TOKEN_TO_BE_REPLACED

Cleanly, those porch dogs are. After a walk, Honeybun stuck her head under the bathwater and paddled furiously. Nervous Nellie seemed more inclined to get a drink. 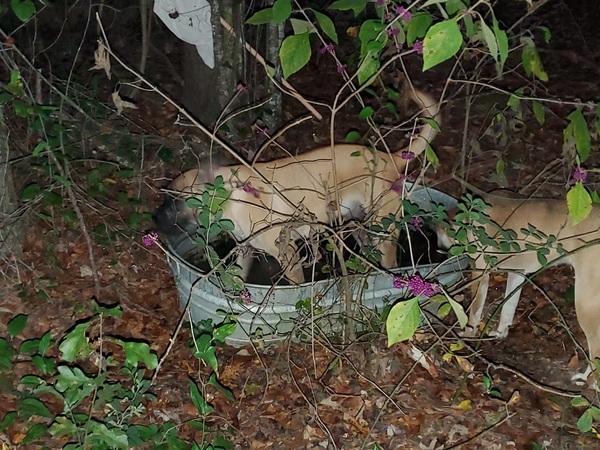 Honeybun and Nervous Nellie in the beautyberry bathtub

Around Okra Paradise Farms this morning. 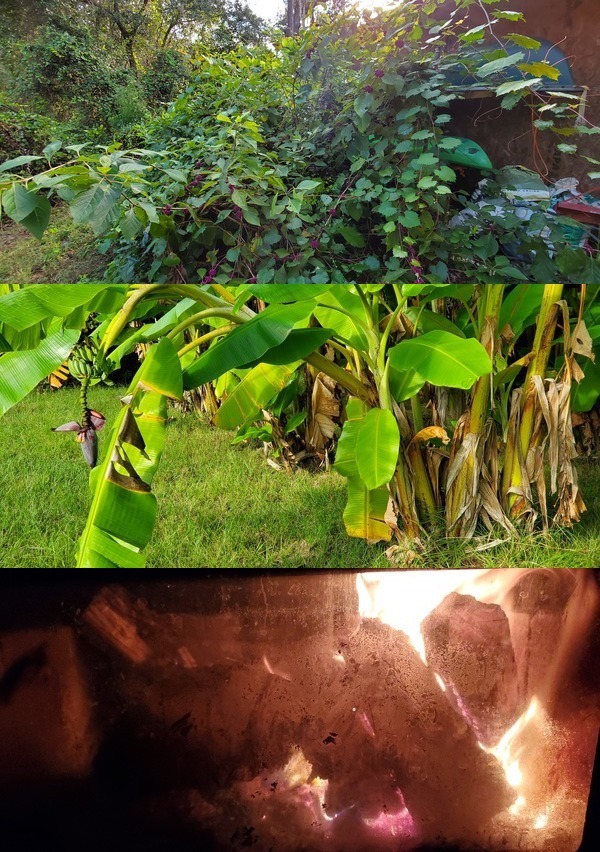 Also grapevine. And I keep pulling up END_OF_DOCUMENT_TOKEN_TO_BE_REPLACED END_OF_DOCUMENT_TOKEN_TO_BE_REPLACED

In 2006, researchers at the U.S. Department of Agriculture’s Natural

Products Utilization Research Unit in Oxford, Miss., found that extracts from beautyberry leaves could match DEET for repelling mosquitoes. The next year, experiments showed that the active ingredients from the leaves (callicarpenal and intermedeol) provided 100-percent repellency of black-legged ticks for three hours. In 2008, the four-person research team, headed by chemist Charles Cantrell in Mississippi and entomologist Jerome Klun in Maryland, published research that added fire ants to the list of pests repelled by essential oil distilled from beautyberry leaves….

Fresh green leaves, crushed and rubbed on people or pets, often repel insects for a couple of hours.

Looks like Charles L. Cantrell of U. Miss. has published several papers about this: Due to discussion on facebook with Rihard Sexton after the previous post, I dug around a bit, and discovered that beautyberry (Callicarpa americana) is also known as dwarf mulberry, French mulberry, and Spanish mulberry, sow berry, and sour berry. That last is especially a misnomer, because its berries are not sour, they taste like flowers. And it turns out that beautyberry was mentioned in books before 1800, it was just mentioned as dwarf mulberry:

Further, William Bartram did mention it in his Travels of 1791, as French mulberry. Curiously, even though Google books does have Bartram’s book, ngrams doesn’t seem to show French mulberry for that date, but does show American mulberry. Even more curious, William Bartram’s father, John Bartram, corresponded with Linnaeus, the founder of modern botanical terminology.

The currently most popular name is beautyberry, which turns out to be related to the scientific genus name, Callicarpa: Greek kalli means beautiful, and Karpos means fruit.

The plant has all sorts of uses: END_OF_DOCUMENT_TOKEN_TO_BE_REPLACED

Google’s latest new thing is which show frequency ngrams, of any given word (or more than one) in books from 1600 to the present. Beware, you can end up there for hours!

Anyway, comparing the common name beautyberry to the scientific name Callicarpa americana, it seems that the “common” name is much newer, at least in books.

Beautyberry is a piney woods bush that fruits as small violet berries that make tasty jars of jelly: