Like the okra, the corn sprouted right on time. 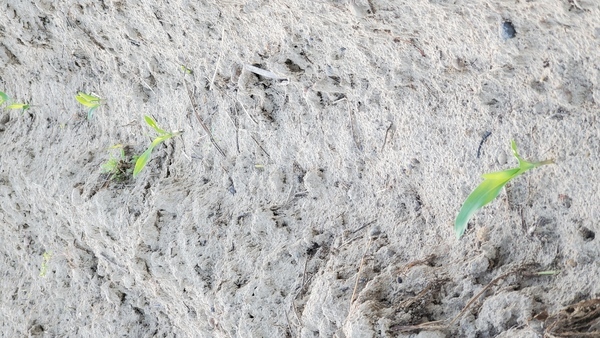 A row of corn

We planted this red corn on March 23, 2021, and a week later, here it is sprouted. END_OF_DOCUMENT_TOKEN_TO_BE_REPLACED

END_OF_DOCUMENT_TOKEN_TO_BE_REPLACED Gretchen Quarterman takes a break and joins them. END_OF_DOCUMENT_TOKEN_TO_BE_REPLACED Steve Connor writes in The Independent 28 Sep 2010 that GM maize ‘has polluted rivers across the United States’:

An insecticide used in genetically modified (GM) crops grown extensively in the United States and other parts of the world has leached into the water of the surrounding environment.

The insecticide is the product of a bacterial gene inserted into GM maize and other cereal crops to protect them against insects such as the European corn borer beetle. Scientists have detected the insecticide in a significant number of streams draining the great corn belt of the American mid-West.

The researchers detected the bacterial protein in the plant detritus that was washed off the corn fields into streams up to 500 metres away. They are not yet able to determine how significant this is in terms of the risk to either human health or the wider environment.

This is the same “gene from the bacterium Bacillus thuriengensis (Bt)” used in Monsanto’s RoundUp Ready cotton and peanuts and soybeans. Since END_OF_DOCUMENT_TOKEN_TO_BE_REPLACED
Andrew Pollack writes in the New York Times that After Growth, Fortunes Turn for Monsanto: Anyway, could all this bad news have some effect on Monsanto’s share price? END_OF_DOCUMENT_TOKEN_TO_BE_REPLACED

Steve Connor writes in the Independent that It pays not to cultivate GM crops, survey finds,

The first economic analysis of growing genetically modified crops on a wide scale has found that the biggest winners were the farmers who decided not to grow them.

The study, which looked at maize yields in the corn belt of the United States, found that farmers who continued to grow conventional crops actually earned more money over a 14-year period than those who cultivated GM varieties.

The article then tries to say they nonetheless benefited from genetic modification:

All farmers benefited from the significantly lower level of pests that came about after the introduction of GM maize to the US in 1996, but the conventional farmers who continued to cultivate non-GM varieties also benefited financially from not having to pay the extra costs of purchasing GM seeds.

Um, what about not having to pay for the pesticides that go with the GM seeds? The study’s author admits they didn’t study that sort of thing:

“Additionally, environmental benefits from corn borer suppression are likely occurring, such as less insecticide use, but these benefits have yet to be documented,” Dr Hutchinson said.

The Telegraph spelled his name wrong. This appears to be the actual report:

The full text is behind a paywall, but the abstract concludes with:

So growing 98% of crops from GM seeds, as is the case in Georgia, is a bad idea.