But while health care reform is finally on the table, and an organic farm has, for the first time, been planted on the White House lawn, there are an unsettling number of foxes being appointed to guard the U.S. health care and food industry hen houses … foxes that have entirely too many connections to Monsanto, the chemical manufacturer turned agricultural giant that is slowly gaining control over the world’s population, one seed at a time.

The New Secretary of Agriculture is a Fan of Factory Farms, GM Crops and More

Former Iowa Governor Tom Vilsack is now the Secretary of Agriculture, an appointment that took place despite massive public outcry. What was needed for an effective Secretary of Agriculture was someone who would develop and implement a plan that promotes family-scale farming and a safe and nutritious food system with a sustainable and organic vision.

What we got was yet another politician who’s already made room in his bed for the industry lobby. As the Organic Consumers Association (OCA) points out:

It’s going to take more than just a new president to break the grip of big agribusiness on government. As FDR said:

It would take very little tweaking to make the U.S. DoT’s high speed rail plan run through Valdosta to get from Macon to Jacksonville, instead of bypassing to the east. 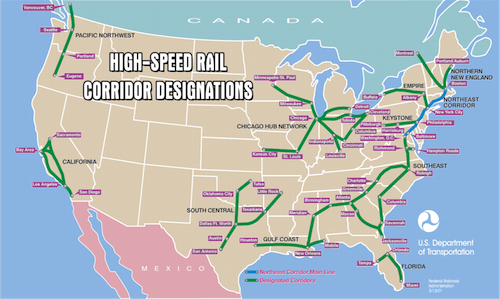 Macon-Valdosta-Jacksonville is, after all, the historic route, and the tracks are still there and in use for freight. In the first phase of the DoT’s plan,

“applications will focus on projects that can be completed quickly and yield measurable, near-term job creation and other public benefits”

So who in Valdosta or Lowndes County is talking to DoT about this?