The Atlanta-based burrito chain will roll out a new nationwide menu on Jan. 24, top executives told The Atlanta Journal-Constitution. Coming soon to 420-plus restaurants will be grass-fed sirloin steak with no added hormones. The pork will be hormone-free, steroid-free and grain-fed. Moe’s says its chicken will be hormone-free and not raised in cages, and the tofu will be organic.

Sounds good to me. Why are they doing this?

“The Moe’s consumers have told us this is something they want,” said Paul Damico, president of the brand. “We take that information seriously. They tell us they want fresh, they want sustainable.”

Voting at the checkout counter works!

They have three locations in Valdosta:

PS: And I learned that Moe’s is based in Atlanta. 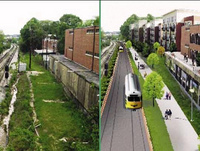 The most common reaction to any proposal of rail transit near Valdosta or Lowndes County is “there’s not enough population”. Yet there’s this:

Another rail opponents’ argument has yet to be addressed: Atlanta is simply too spread-out to make passenger trains worthwhile. The Beltline runs in circles around the most important job center — downtown — and will have to rely instead on connections with MARTA for those commuters.

Yet, despite all that, city leaders still believe in what first Gravel imparted: take these old train tracks, make them useful and pleasant, and development will come.

It will be a different kind of development, pedestrian-friendly and a bit denser in place of the car-friendly sprawl. The new buildings that spring up around Beltline transit stops and parks will give Atlanta new places for people to live. And it will be an agreeable place, improving land values and enhancing property tax revenues.

If even sprawl-happy Atlanta can manage denser rail-based development, Lowndes County can, too. A start would be to have the bus system (Valdosta, Lowndes County, or combined) run all the way around Perimiter Road, which is the local equivalent of the Beltline.

People say the east side of Perimeter Road was intended for industry. Well, maybe, but there is already a school and at least one subdivision there, and it could also be used for affordable housing, especially if there was bus or train service.

Maybe we should try this kind of stakeholder involvement:

The TADAC is made up of stakeholders from across the broad spectrum of Atlanta and is composed of community members representing the Atlanta neighborhoods and technical experts with a commitment to making the BeltLine a success for the City. Including experience in the area of parks and trails planning and development; transit planning and development; finance and business; complex project management; affordable housing; urban planning; arts and culture; historic preservation; green building principles and other subjects relevant to the BeltLine.

Instead of holding a few meetings and hoping people show up (and that is already an improvement over previous days), maybe actively seek out stakeholders both pro and con and get them regularly involved.

The VDT studied jail deaths back in 2006:

Recent reports of the death of an inmate in the Lowndes County Jail have a number of citizens questioning the causes and numbers of deaths that have occurred at the jail in the last several years.

They found that the number of deaths per inmate population per year in Lowndes County was similar to those for Fulton County and DeKalb County. However, there’s a lot more context that the VDT did not include.

Perhaps for reasons of space, the VDT did not include a list of inmate deaths. Here is George Rhynes’ attempt at compiling a complete list of jail deaths in Lowndes County, 1994-2009.

More generally, beyond comparisons with Atlanta counties, how do Lowndes County inmate populations compare with those elsewhere? That’s a longer story for another post.

Where could you go on the railroad? Quite a few places, in 1918:

And Valdosta was right in the middle of it all.

There used to be a train called the Royal Palm that ran from Detroit and Buffalo via Cincinnati, Atlanta, and Macon to Jacksonville. This schedule is for 1953:

Jacksonville Transit Blog brings this up while quoting a Valdosta Daily Times article about Valdosta's new transportation plan. Hm, 5 million people in Atlanta, 3/4 million in Jacksonville, and Valdosta halfway in between….